skip to main | skip to sidebar

MLB does nothing as well as it does its work for Stand Up To Cancer, promoting the fundraising, research and collaboration organization throughout the year and spotlighting it during the World Series. The moment at the Series when everyone in the park stands up is emotional. I've been there. I was at the first one, in 2009, and it's incredible to realize that everyone, I mean everyone, has been touched in some way by this evil disease.

The moment was personal this year. 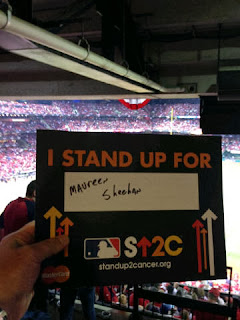 A friend of mine at the game sent me that picture last night. He'd written my mother's name on a placard and held it up. I couldn't do it myself, because I'm here in New York, where my mother is recovering from surgery last week that we hope moved her from cancer patient to cancer survivor. She's down a lung, but she's also down a rather large tumor, a trade you make every time.

If you've read me much, you know that I get my love of baseball from my mother and my late grandfather. He taught me how to bat left-handed, she taught me how to throw. She was a tomboy growing up, and I still can remember her occasionally playing stickball when I was a kid. She loves sports, just recently got a 60-inch TV to better watch them. Even at sixtymumble, she's an avid golfer with a regular game at Mosholu Park on Saturdays, one she had to put aside last summer as she endured first pneumonia related to the cancer, then the diagnosis, a regimen of chemotherapy and now the surgery. One of her golf buddies came by to see her last Wednesday after the surgery, and they were already talking about next spring, talking about their games.

That's my mother. Her mental game throughout this has been fantastic -- a hell of a lot better than mine, I'll tell you. When she was diagnosed in July, her only question was, "What do we do?" When the initial plan of surgery gave way to chemo -- and the associated effects -- she handled them without complaint. Eight weeks into chemo, mom was doing well enough to be at Yankee Stadium the night of Mariano Rivera's final appearance, standing and cheering, no outward sign at all that she was two months into the process. She was particularly happy with her outfit. 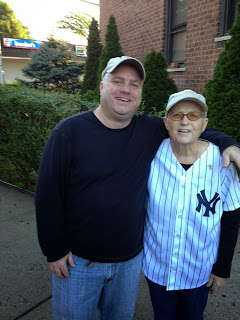 As the cameras scanned the crowd last night, as I thought about Mike holding up that sign, I didn't come close to keeping my composure. (No pics, sorry.) I thought about July 9. We were sitting in the office of her primary doctor, a pulmonary specialist, and hearing that her life was about to change. I was staring at the floor, holding her hand, shaking like a leaf. After the doc was done explaining his diagnosis, you know what mom did?

Get the Joe Sheehan Baseball Newsletter forever for just $525.