skip to main | skip to sidebar

Reader Travis Leleu did an analysis of the newsletter's content…I'll let him explain:

I visited each of your newsletter articles (453) available on your website and looked how frequently you mentioned teams and players. Each team/player only counted once per article, i.e., an article mentioning the Yankees twice only counted once.

To the results: you wrote about the Yankees and Rangers a lot, nearly three times as frequently as the Astros, Blue Jays, Marlins, and a few other teams.  Your most commonly mentioned player was Cliff Lee (makes sense; he's been a big trade deadline / free agent / superstar pitcher over the sample period).


This analysis was done last fall, so it's slightly out of date. (That's on me, not Travis, as I've been sitting on this for a while.) But it's fun to share, and I hope you'll get a kick out of it. Thanks to Travis for doing the work. 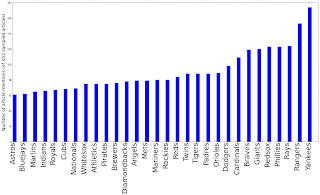 Newsletter Extra: There Is No "Clean"

Lance Armstrong, it turns out, was a walking biology experiment.

This doesn't bother me as much as it does others. The things we call "medicine" today would have been called "witchcraft" 50 years ago, and the things we call "cheating" today will be "medicine" 50 years from now. Where the lines are drawn are more about politics than anything else, and I don't have faith in politicians to get politics right, much less science or anything else of actual import.

The thing is, Armstrong denied any bad behavior right up to the point he couldn't any longer. The reason he couldn't continue to deny it was that -- despite his saying it was about his son defending him -- there was a mountain of evidence against him, the product of tens of millions of dollars spent investigating his use of sports drugs and the practice of blood doping. Armstrong is one of the people who, due to their success and their high profile, have been targeted by individuals, such as journalists, and organizations, such as the US Anti-Doping Agency. There has been more time, money and effort put into researching the history of what Lance Armstrong put into his body than there has for your average biker.

Similarly, in baseball, we have Barry Bonds. Bonds was the subject of a best-selling book, Game of Shadows, that attempted to answer the questions of whether and when he used sports drugs. On the heels of that, Bonds was the target of an investigation by various government agencies as to whether he used sports drugs and subsequently lied about it to a grand jury. As with Armstrong, we have some idea of what Bonds used and when because of the staggering sums that were poured into finding out the information.

In baseball, we also have the Mitchell Report, a prosecutorial brief that cost $30 million and was built largely on publicly-available information and the testimony of a couple of drug dealers looking for leniency. It produced names that were helpful in feeding the media beast, but little else of import. At that, most of the names have been forgotten.

Think about these processes. In Armstrong's case, a man operated a bike-race-winning drug ring for years, became a folk hero and only confessed at the end of a decade-long effort by multiple organizations the cost of which may have topped out at $100 million. With Bonds, you had a book by two respected investigative journalists and a witch hunt by a federal government operating almost with impunity, producing, in the end, only a very shaky conviction on a count of felony dissembling. The Mitchell Report? You could have lit three million hundred-dollar bills on fire in Times Square for all the useful, reliable, consistent, actionable information it produced.

So if that's what you get when you put hundreds of millions of dollars and enormous amounts of manpower into investigations of sports-drug use, then how can we ever say that anyone is clean?

We just went through a Hall of Fame voting cycle that indicted a number of players' careers on a variety of shaky evidence, from a failed drug test in a final season to a confession of use to "just look at him". Next year, however, a number of players will hit the ballot who come into the conversation with a presumption of cleanliness, such as Greg Maddux and Frank Thomas. That presumption, which is granted based largely on whether your stats were "good, but not too good" and whether you had an acceptable relationship with the media, is utterly ridiculous. We've seen what time and money produces, which isn't very much. If you cloned Mark Fainaru-Wada and Lance Williams an infinite number of times and set them loose on every single player who played from 1985 to today, what would they find? If you told Jeff Novitzky that the MLBPA had issued a press release saying his mother wears army boots, what would we learn about everyone?

The biggest lie of the so-called "steroid era" -- and the intellectually bankrupt way in which the media has convicted the approved villains of that era -- is that we know who didn't use. We do not and we never will. Assumptions that Thomas or Maddux or Jim Thome or Ken Griffey Jr. or Derek Jeter are "clean" are as meaningless as assumptions that Jeff Bagwell or Mike Piazza or Sammy Sosa are not. We don't know. We don't know because no one ever looked so deeply into those players as they did into Bonds, as they did into Armstrong. You can't read sports-drug use by looking at a person's body, and you can't read it by looking at a stat line, and you damned sure can't read it based on who's answering questions in front of his locker after a tough loss. Too often, though, that's how those decisions have been made.

We don't know. We'll never know. To grant the presumption of innocence to some and not to all, though, is to ignore just how hard and how expensive it has been to gain the minimal knowledge we have about the people who have been the primary targets of investigation. It's time to stop designating some players as "clean", because the gap between "clean" and "dirty" is really just about who pissed off the wrong people.
Posted by Joe Sheehan at 3:00 AM


The best free agent remaining on the market, Michael Bourn, has a flawed profile, as discussed in Thursday's newsletter. Bourn was expected to pace the center-field market when the offseason began, but B.J. Upton, Shane Victorino and Angel Pagan all signed fairly quickly, and teams like the Nationals and Reds filled center field through trades. Despite this, there are a number of teams who could use him, even teams not specifically in the market for a center fielder. Here are the teams that are the best fits to sign Bourn at this late date.

Rangers: The Rangers got neither Zack Greinke nor Josh Hamilton, and they signed A.J. Pierzynski to a bargain-basement deal. Even eating money for Michael Young and some raises due to players under contract, the Rangers have money to spend. With Hamilton gone, they're missing an outfielder, with Leonys Martin now slated to have a starting job -- something he's yet to prove he's ready to keep. With Nelson Cruz a free agent after 2013, the Rangers are going to need an outfielder in 2014 as well. They could sign Bourn, get a big defensive upgrade in 2013 and fill the leadoff spot, allowing Ian Kinsler to bat lower in the order, better fitting his skill set. Bourn/Kinsler, with Elvis Andrus ninth, is better than Kinsler/Andrus, with Martin ninth. Signing Bourn a short-term solution that would make the team better, and he'd even be a serviceable fourth outfielder on the back end of a three- or four-year deal.

Orioles: The Orioles don't have a leadoff hitter, though they did get good work from Nick Markakis in that role last last year. They've re-signed Nate McLouth, but McLouth makes a better extra man than starting left fielder. (They also hope for a healthy Nolan Reimold in 2013.) Signing Bourn is also unlikely given Adam Jones' defensive reputation and salary, even though he's not a plus center fielder. File this under moves that make more sense to the statheads than the front offices.

White Sox: Alejandro de Aza was an incredibly important player for this team last year, and he sets up as one again next year. The White Sox project to get poor OBP from as many as six lineup slots, and there's no guarantee de Aza repeats rather than adds to that number. The Sox, down Kevin Youkilis and A.J. Pierzynski, need Bourn's OBP, even taking the downside risk into account. A de Aza/Viciedo platoon in left field is much more attractive than Viciedo as an everyday player as well.

Rays: Desmond Jennings moves over to center field, but he's 26 years old and has a career .327 OBP in the majors. That number was .314 last year. Sam Fuld is listed as a starter for this team, so clearly Bourn would be an asset. In an AL East where the Yankees and Red Sox are down, the Rays could pick this year to spend some money. Bourn also fits their defense-centric approach.

Yankees: This is unlikely, because the Yankees are determined to reset their payroll below the luxury-tax threshold. Doing so could save them $50 million over a period of years, so it makes sense to do so. Signing Ichiro Suzuki -- who has been a replacement-level player for two years -- blocks Bourn, as well.

Reds: The Reds don't have a center fielder, and signing Bourn would crowd both their payroll and their outfield. Were they to sign Bourn, though, the impact on their defense, their depth, their team as a whole might be enough to make them the best team in the NL. Given that the Reds have remained below average in attendance despite two division titles in three years, it may be difficult to argue that they should blow open the vault doors for a luxury item.
Posted by Joe Sheehan at 4:00 AM

Get the Joe Sheehan Baseball Newsletter forever for just $525.